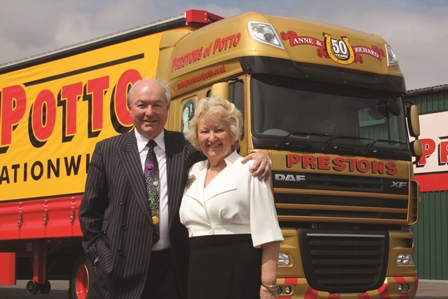 Richard Preston, who co-founded haulage firm Prestons of Potto with his wife Anne, has died, aged 81. He started the business, now run by son and MD David, in 1957 as a successor to his father’s threshing contractor business, which was set up in 1936. Richard, who along with Anne remained chairman at the firm, died on 30 December after a short battle with leukaemia. Anne, who was awarded an MBE, told local media that her husband was an amazing […]

Harlequin Logistics has won a contract with Tate & Lyle Sugars to distribute stock from the manufacturer’s Silvertown, East London production site to warehouses across the UK.

Harlequin Logistics is now running about a dozen 15.65m trailers on its Kellogg’s operation, as part of the government’s 10-year trial of longer semi-trailers. Four of the five members of the year-old haulier consortium – Currie European, John Raymond Transport, Jack Richards & Son and Prestons of Potto – are running the longer trailers for the cereal giant, shipping loads from Manchester throughout the UK. The 3.04m-high SDC Trailers can carry 60 pallets rather than the normal 52, said Currie’s […]

The collapse of British Steel stopped Prestons of Potto making a profit last year, but its owner said the Northallerton company was now back in the black.