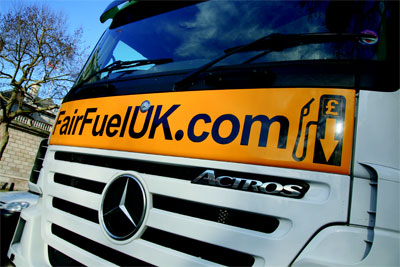 More than two thirds of HGV drivers want to leave the EU, according to a survey from the FairFuelUK (FFUK) campaign. Of the 1,973 HGV drivers that took part in the campaign’s survey on Thursday’s referendum, 69% said they planned to vote in favour of a Brexit. Just 15% of the drivers said they would vote to remain, while 14% said they were undecided. The remaining 2% said they would not say or did not intend to vote. A poll by […]

UK ‘four meals away from anarchy’ in event of Brexit no-deal, warns expert

The prime minister needs to get a Brexit deal through parliament, as the UK is only ‘four meals away from anarchy’ in the event of no-deal, delegates at the Feeding Cities Summit were told yesterday (21 November).

Fair Fuel UK has renewed its call for the government to cut fuel duty to spur the struggling economy, after the Bank of England slashed its UK growth forecast for 2012 to close to zero. Quentin Wilson, national spokesman for FairFuelUK, says: “Growth is paralysed so it’s time the government looked at cutting fuel duty to stimulate activity. If we spend less on fuel tax, we’ll spend more on other things.” Wilson argues fuel duty is one of the last […]

FairFuelUK vows to fight on in battle over fuel duty