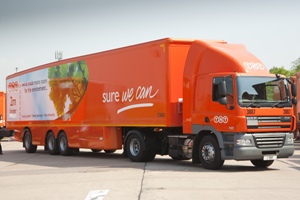 Profit at TNT UK almost quadrupled in 2012, during a year that put parent company TNT Express under pressure while the proposed takeover by parcel giant UPS was being considered. Pre-tax profit soared to £13.8m for the year ended 31 December 2012, after a year that saw it slip to £3.4m in 2011. It said the rise was due to “cost saving initiatives and operational changes”, as well as restraining its spending. Turnover, however, remained broadly flat at £782m, down […]

Netherlands-based post and parcel firm PostNL – parent company to TNT Post -has sold part of its stake in TNT Express.

DPDgroup has increased its majority shareholding in e-commerce delivery company WnDirect to 83%, effectively taking full control of the business.

TNT Express has won a contract to become the exclusive express delivery provider for musical instrument and audio equipment manufacturer and Gibson.

by Admin Support in Industry News

The DVSA has had to postpone its campaign to remind HGV drivers and operators of the regulations around driving time and rests and to encourage them to stick to the rules as a result of [...]