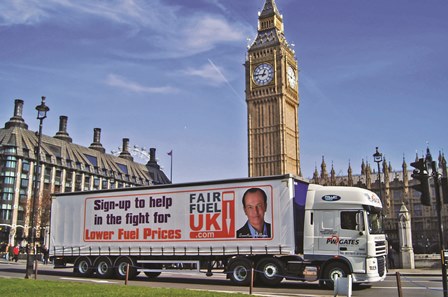 The FairFuelUK (FFUK) campaign has suggested that leaving the EU could help the UK solve its HGV driver shortage. Speaking after 52% of the British public voted in favour of Brexit, FFUK co-founder Howard Cox said that while the result was unlikely to lead to “a mass overhaul of our transport laws, a review of the dreaded European Union Directive CPC may help with those critical HGV driver shortages”. Cox added: “The major trade bodies should be commercially creative with the […]

Truck manufacturers have called on the next government to secure a swift deal on Brexit and stop the uncertainties that could result from drawn-out negotiations.

More than two thirds of HGV drivers want to leave the EU, according to a survey from the FairFuelUK (FFUK) campaign.

Widnes-based tanker specialist Suttons was founded by Alf Sutton in 1926 and remains family-owned. The founder’s grandson John Sutton was appointed CEO of Suttons Group in 2013 and the Sutton family still form the majority of the Suttons Group board. Suttons Group has two operating divisions: Road Tankers, headed by MD Michael Cundy; and Suttons International, where Barry McNally is MD. Road Tankers turns over around £70m a year, with the business split roughly 55% chemicals, 35% gases and 10% […]