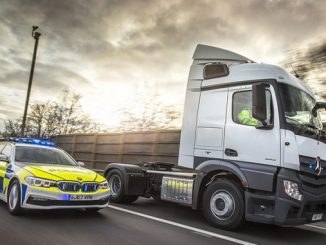 An HGV driver was caught holding two mobile phones – one to each ear – as he drove along the M4 in his 44-tonne vehicle. The incident was one of more than 100 offences Avon and Somerset police spotted last week on motorways and described as “appalling, unacceptable and dangerous”. It was captured on camera by officers as they patrolled in an HGV cab on loan from Highways England. The police also spotted a 3.5-tonne vehicle illegally towing a trailer […]

Former Euromix Concrete finance director David Marsh has been disqualified for eight years from any involvement in the promotion, formation or management of a company. It came after he provided the Insolvency Service with a disqualification undertaking, having admitted to fraudulent abuse of an invoice discounting facility.

Tuffnells Parcels Express, part of Connect Group, has been fined £1.5m after a driver died when he was trapped between a trailer and his vehicle.

Two directors and two managers of Commercial Vehicle Solutions (CVS) have been cleared of the charges of fraud they faced at Leeds Crown Court.