Solar panels that cut fuel consumption by 5% could become a regular feature on UK trucks after Deutsche Post DHL Group started the roll-out of the technology.

Following a trial of the TRAILAR flexible solar matting on the roofs of DHL Supply Chain’s UK fleet, the operator said a global roll-out within the group was underway.

The technology - showcased at this year's Microlise Transport Conference - is also being made available to third-parties to purchase.

The energy harnessed by the panels can help power almost anything that relies on electricity within the vehicle, including air conditioning, windows, radio, as well as tail lifts and one of the biggest draws on power: turning over the engine.

The tests demonstrated the vehicles could make fuel savings of 5.2%, as well as saving four tonnes of carbon dioxide a year on each vehicle.

“As a business we have committed to zero emissions by 2050,” added Thomas. “This will help us get there.” 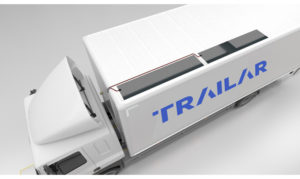 She said that the downsides of solar panels were minimal, but added: “Due to the way in which they’re affixed to the truck, it is not easy to port the solar panels themselves from a current vehicle to a new vehicle – though many of the other components can be transferred fairly easily.

“Similarly, the use of solar panels on trucks is too new and too low in penetration to determine the residual value at this time.”

TRAILAR is being exhibited at this weeks IAA CV show in Hannover and the company is part of Deutsche Post DHL Group.

Stoneridge will focus on urban logistics safety at Freight in the City Expo on 6 November, showcasing its range of camera and tachograph analysis software.

Freight operators only have a few days left to give their views on joint air quality proposals being explored by Newcastle, Gateshead and North Tyneside Councils.

Bath and North East Somerset Council has voted in favour of a £100 charge for non-Euro 6 HGVs entering the city’s Clean Air Zone.