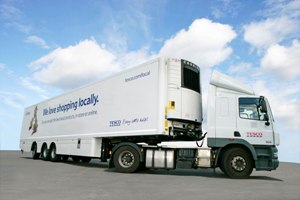 Tesco is re-tendering its transport operation after the announcement it would close two DCs and move some of its warehouse operations in-house. A spokesman for Tesco confirmed that the retailer was re-tendering the transport services for its frozen operations from Daventry and its fresh operation from Snodland, Kent. Tesco announced yesterday that it would be closing its Welham Green DC in Hertfordshire, moving grocery distribution operations to Reading, alongside the closure of its Chesterfield DC (with general merchandising moving to one DC in […]

2013 was a year of moves forward for every transport firm listed on the Stock Exchange. And while we lost CityLink (to a management buy-out), we gained Royal Mail – and a whole heap of market capitalisation. So without further ado – let’s find out who the big winners were!

Third-party logistics providers have this year won millions of pounds in business, taking on more work from existing customers as well as winning contracts from new clients. Motortransport.co.uk looks back at some of the highest value and longest contract wins of 2014.

“Huge” damage caused by a Tesco lorry when it crashed into a railway bridge earlier this week has prompted a train operator to criticise HGV drivers for not taking enough care on the roads.