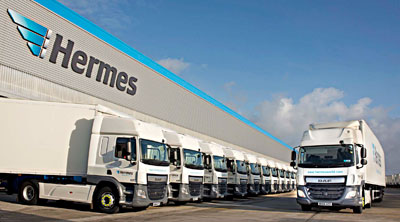 The chief executive of Hermes UK has admitted the company had not been as compassionate as it expected itself to be with its self-employed couriers, as a government minister called on HMRC to investigate the carrier’s zero-hours contracts. An investigation by the Guardian in July accused Hermes of paying its self-employed couriers below the minimum wage, and suggested working conditions were stressful to the point that employees were too afraid to call in sick. Speaking to Motortransport.co.uk in the wake […]

Hermes Sustainability is at the forefront of Hermes’ operating model as it recognises the impact of its transport supply chain on the environment. To improve environmental performance within its trunking operations, in 2020 Hermes added seven new CNG vehicles, taking the total to 90 CNG tractor units.

Hermes has revealed that its ParcelShops have handled more than 870,000 parcels since the concept was introduced in June.

Hermes Group says it is “outperforming the competition” in the UK

Hermes Group, parent company of UK parcel carrier Hermes Parcelnet, has seen “significant growth” in turnover for the twelfth year running, which it attributed to the rapidly growing e-commerce sector.