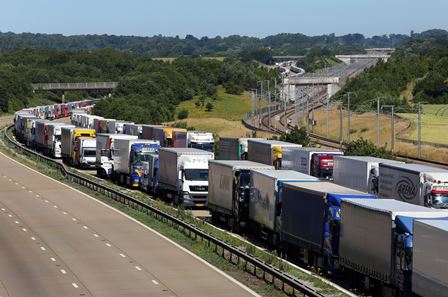 Government plans to build a £250m lorry park in Kent to prevent delays caused by Operation Stack have been criticised by the Transport Committee, which described the decision as “rushed” and called for more research into its cost and impact. The 4,000 space lorry park, which will be the largest in Europe, is intended to prevent a repeat of the massive queues on Kent’s roads last summer caused by disruption at the Port of Calais by migrant incursions and industrial […]

SD Parr contract is cherry on the cake for Walkers Transport

Walkers Transport has been appointed main haulier for SD Parr in a deal that will see it move around 2,000 pallets per year for the glaced fruits and bakery products distributor. Leeds-based Walkers secured the contract with Barnsley-based SD Parr after a competitive tender and will be responsible for storing and delivering SD Parr’s products throughout the country. John Pedley, MD at SD Parr, said that Walkers’ network, warehousing facilities and IT system meet its business needs. “We see Walkers […]

PML MD Mike Parr (pictured) has waded into the escalating dispute over Kent County Council’s plan to ban trucks from parking in several areas of Kent for more than 45 minutes.