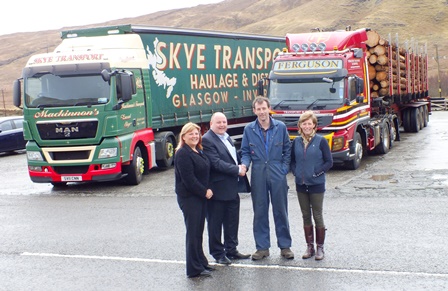 Ferguson Transport (Spean Bridge) increased turnover by almost 11% last year, despite downturns in some of the sectors it operates in. The Highlands haulier said sales had increased to £16.4m in the year ending 30 April 2015, up from £14.7m in 2014. However, pre-tax profit fell to £120,000, compared with £881,000 the previous year. In its latest financial accounts the company said it had increased turnover “across a broad base of revenue streams” and that its net asset position had […]

Ferguson Transport and Shipping has furloughed 26 drivers and 14 staff following the launch of the government’s Coronavirus Job Retention Scheme portal this week, after being reassured payments for furloughed workers will arrive in the company’s bank account within six days of a claim being submitted online.

Vehicle strategy leads to 26% rise in profit at Macintyre Transport

Container haulier Macintyre Transport has reported a 26% rise in profits on the back of extending the working life of some of its vehicles.

Lockwood trades strongly through Covid but profits under pressure

Lockwood Haulage reported a 3.7% increase in turnover last year, which it attributed to investments in its fleet and its warehouse capacity.

A veteran HGV driver has told transport firms to take on the supermarket giants to demand fairer and more consistent pay rates.