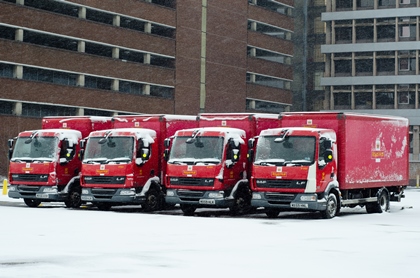 Profit fell by almost a third at Royal Mail in the first half of the current financial year, as the business invested heavily as part of its ongoing modernisation. A trading statement for the six months ending 27 September 2015 released today records a 30% decline in pre-tax profit, which fell from £167m to £116m. Revenue remained effectively flat in the period, decreasing 1% to £4.4bn (2014: £4.5bn). The group’s transformation costs, including almost 3,000 voluntary redundancies in its UK […]

Potter Group Logistics has credited stringent cost control, which hasn’t come at the expense of good  customer service, for a 27% jump in annual pre-tax profit. Matthew Lamb, MD of Potter Group Logistics, said:  “As always our focus is on delivering first class customer service. “We have achieved this while applying rigours controls on overheads across all areas of the business.” As a result, pre-tax profit in the year ended April 2012 was £1.04m (2011: £817,000), with turnover 2.8% ahead […]

Collapsed car transporter firm was back in profit when Covid struck

Car transporter company Drive Force (UK) had only just returned to profitability after experiencing 18 months of cash flow difficulties, before Covid-19 forced it into administration.