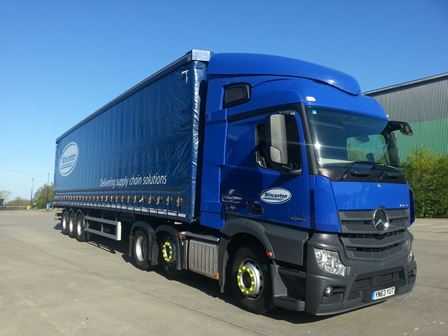 DHL Supply Chain has taken over operations at Marks & Spencer’s Swindon DC, which was formerly managed by Wincanton. A DHL spokeswoman said it took over operations at the site on 4 January. The contract involves the management of the Swindon site as well as the storage and distribution of general merchandise to M&S stores. A spokesman for Wincanton confirmed it had formerly managed the Swindon site, but declined to comment further. “We regularly review our suppliers to ensure we’re […]

When Motortransport.co.uk spoke to Wincanton chief executive Eric Born last week he claimed there was little he could do about the share price of the company. Sadly, this week has proven that statement to be true.

DHL Supply Chain has won a ten-year contract with Gatwick Airport to manage inbound deliveries through its new logistics and consolidation facility.

Wincanton is trialling four low-level access tankers that is says will improve driver safety, and boost both its environmental credentials and vehicle utilisation. The “game changer” side manway design, which has been developed with manufacturer Feldbinder, provides side access to the silo tanker. Wincanton said the design combines the benefits of both tipping and silo tanks by reducing the potential dangers, while also offering around a 5% payload benefit compared to tipping tanks. Dave Rowlands, Wincanton’s technical director, said: “The […]