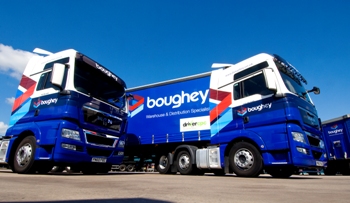 Despite new business wins and growth in average storage volumes, turnover at Boughey Distribution remained flat last year. In its annual results for the year ended 31 May 2014, parent company NWF Group revealed that Boughey, its food distribution division, signed a number of long-term contracts during the year, boosting storage volumes at the business. NWF claimed overall storage levels at Boughey reached an average of 97,000 pallets during the year, compared to 93,000 the year before, but total loads […]

Lombard, the asset finance division of the RBS Group, is actively seeking funding opportunities in road transport, bucking the trend which has seen several lenders leave the market since 2008. Lombard’s head of commercial transport, Derek Pridmore, says it is not the case that operators looking to fund new vehicles have little choice but to use manufacturers’ captive finance offering. “We financed £250m of truck sales in 2011, making Lombard the biggest single funder of CVs in the UK,” he […]

Profit up 8% at Suckling Transport

Suckling Transport delivered an 8% rise in pre-tax profit in the year to 31 December 2015, according to its latest annual results.