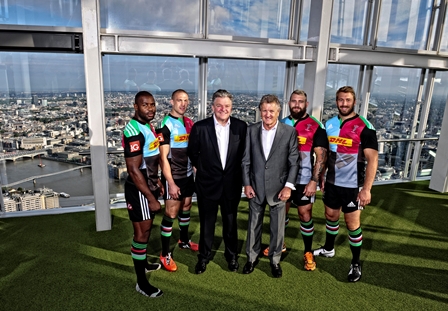 DHL has announced a five-year deal to become the principal partner of rugby union team, Harlequins. The Aviva Premiership team, based at the Stoop in Twickenham, London, becomes the latest member of the DHL sporting stable, alongside football club Manchester United and, in motorsport, Formula 1 and the new global Formula E electric car racing series. The deal, which sees DHL take pride of place on the club’s new Adidas kit, continues a relationship begun in 2012. At the launch, […]

Burton’s Biscuit Company has entered into a five year partnership with DHL Supply Chain. DHL will be working with the biscuit manufacturer, who produces brands such as Jammie Dodgers, Maryland Cookies and Wagon Wheels, to support their international and domestic growth. Neil Grocock, chief supply chain officer at Burton’s Biscuit Company, said: “Investing in our core logistic capabilities is part of a broader, brand-focused strategy we’ve adopted which enables us to align our skills, resources and efforts towards more impactful […]

Companies relying on postal carriers for deliveries into the EU have been warned delays are being caused by couriers struggling with customs and duty charges.