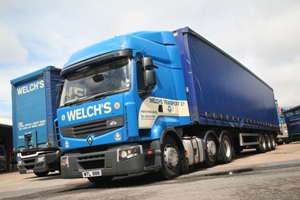 Trading at the transport operations at Welch’s Transport this year is “progressing well” after a “reasonable  performance” in 2012,  according to MD Jim Welch. Despite the contribution of road haulage and warehousing activities at Welch’s Transport falling slightly from £8.8m in 2011 to £8.6m in the 12 months ending 31 December 2012 Welch told Motortransport.co.uk that the division “traded consistently profitably, and ahead of 2011”. Last year it relocated its Cambridge transport depot – which saw it release its existing […]

DX Group has revealed the details of its expanded Ikea contract, alluded to in its half year results in March.

Maritime Transport profits up 41% after takeover of Wincanton container business

Flexing the stockroom for a ‘new’ retail supply chain future

Even before coronavirus, bricks and mortar retailers were facing an existential crisis. Soaring business rates, rent reviews, and minimum wages were already putting pressure on the size and scale of physical shops.