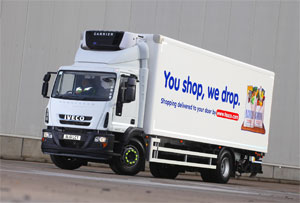 Tesco has defended its recruitment policy after being accused of seeking out foreign workers, rather than British ones, at its new Dagenham distribution centre in East London. Earlier this week, a leaked speech due to be given by Labour immigration spokesman Chris Bryant alleged the new Dagenham site employed a large percentage of Eastern European workers  and suggested the retailer had told staff at its closing Harlow site they could only move to the new centre if they took a […]

TNT Post is to conduct a second end-to-end delivery trial from mid-April in west London, following the successful conclusion of a final-mile trial in Liverpool. The private postal operator has held long-term ambitions to roll-out a complete end-to-end service rivalling Royal Mail, but says it has been unable to achieve this goal due to the national incumbent’s exemption on final mile deliveries. Nick Wells, TNT Post chief executive, says: “TNT Post has built an excellent reputation for quality, innovation and […]

Menzies Distribution is “optimistic” that strike action by 300 of its employees over pay and bank holiday working rules can be avoided.