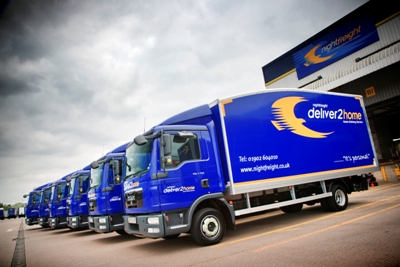 The Nightfreight name will disappear from UK roads as its parent company, DX Group, revealed its fleet will be re-liveried as it strengthens the acquisition it made last year. It has also emerged that Nightfreight contributed £300,000 of EBITDA to DX in its first 15 weeks under new ownership, albeit during its peak season, according to figures filed at Companies House. DX bought Nightfreight in March 2012 for £11.6m. It had struggled to make money under its previous owners, Penglais […]

Fagan & Whalley and Farrall’s Transport have revealed the new livery for their 4PL joint-venture FF&W.

Royal Mail began conditional trading on the London Stock Exchange this morning (11 October), with shares rising in value by over a third just an hour and a half into its listing.

Bibby Distribution in the red

Bibby Distribution Services (Holdings) slipped into the red to the tune of almost £4m in the year to 31 December 2012, compared with a £4.5m operating profit the previous year.

by Sponsored Support in Industry News