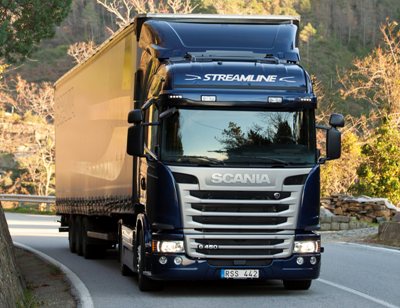 Scania has taken the unusual step of introducing second-generation Euro-6 engines nine months before Euro-6 emissions legislation is fully implemented at the end of this year.   When it unveiled its first Euro-6-compliant 12.7-litre engine two years ago, Scania said that testing showed fuel consumption was comparable with Euro-5’s. But now some competitors are claiming their new Euro-6 engines and trucks are more fuel-efficient than current models. And rivals such as Volvo, Mercedes-Benz and Daf are introducing new or face-lifted […]

The TRATON group, which includes Scania and MAN, believes the EU’s target of cutting carbon emissions from heavy trucks over 16 tonnes by 15% by 2025 can be achieved largely with conventional engine technology but the much tougher target of a 30% reduction by 2030 will require significant sales of alternative drive trains, mainly battery electric.

This Urban eTruck might look like it belongs in a science fiction film, but not so according to Mercedes-Benz UK Truck MD Mike Belk. In this exclusive short interview Belk tells Commercial Motor editor Will Shiers that the future is closer than we think. He also reveals what’s likely to follow Euro-6.

Scania, Nestlé, UPS and Route Monkey have signed up to a new international partnership focused on tackling road freight emissions.