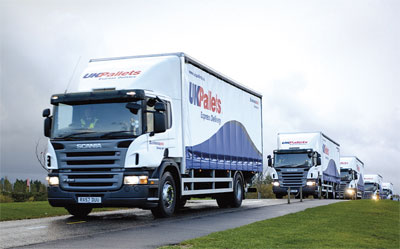 The head of UK Pallets has left the business after more than seven years in his role, Motortransport.co.uk has learnt. Terry Richards, who was previously MD of parent company Business Post (now UK Mail) joined the pallet division as MD in November 2005. This week (4 March) Graeme Wilson, UK Pallets commercial director, assumed Richards’ responsibilities with immediate effect after the later opted for early retirement. Guy Buswell, chief executive of parent company UK Mail, said: “We would like to […]

“We’re an all time high, we’ll change all that’s gone before, doin’ so much more….” This week the basket of shares in the MT Tracker hit it’s highest point since its inception. The basket now stands at 1,954.5p. Shares in Stobart Group are back in to triple figures for the first time since January; shares in Wincanton are at their highest level for the whole calendar year and shares in NWF Group and UK Mail are pretty much at the […]

Pall-Ex has confirmed C Butt will be taking on the postcode currently run by Mainland, following the latter’s merger with Knights of Old. Kettering-based Knights of Old is a member of the Palletforce network, while Northampton’s Mainland runs in the Pall-Ex network. The businesses merged last year. From the 1 June Mainland officially became part of Knights of Old, with its brand and livery now retired in favour of the blue and yellow of Knights. Cris Stephenson, deputy MD at […]