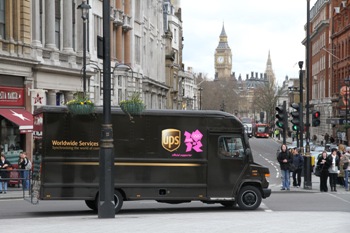 UPS has revealed it will be using bicycles, couriers on foot and London’s waterways in a bid to minimise delivery disruption during the Games period. Following successful trials in January and February in multiple postcodes around central London, the US logistics giant has decided to incorporate a fleet of bicycles into its operation, which will be able to access most nearside Games Lanes on the designated Olympic Route Network. The company will also transport freight from a warehouse at the […]

A continued move from straight transport to logistics activities including warehousing, packing and freight forwarding helped Glasgow-based Gordon Leslie Group achieve a 20% rise in pre-tax profit in the year to 30 September 2012. Turnover in the year fell around 8% to £4.8m (2011: £5.2m), but profit before tax came in at just over £487,000 (2011: £405,000). MD Craig Leslie said the firm had made a “fairly conscious move” in the last two years to reduce its reliance on some […]

Logistics UK has warned the government it needs to act now to stimulate economic activity and restore consumer confidence amid claims the nation’s businesses are “stagnating” after two months of cautious re-opening following the pandemic.

A legend, a pioneer, an inspirational leader – just some of the names John Harvey has been called. Justin Stanton caught up with him for an indepth interview. Just about any aspect of transport, logistics and supply chain management you can think of, Harvey has been there, seen it and done it via his stints at Unilever, SPD and Tibbett & Britten (T&B) – and he probably did it first. He was awarded the CBE in 1992 for his services […]