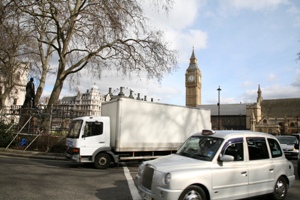 Transport for London (TfL) has held an Olympic briefing with members of the Association of Pallet Networks (APN) to build ties ahead of this summer’s Games. Despite APN representing eight networks consisting of more than 650 hauliers, chairman Paul Sanders has previously expressed frustration at a lack of engagement with Olympic organisers, which the event rectified. Sanders complimented TfL on bringing his members up to speed, and describes the meeting late last month as positive and productive, although he concedes […]

Fee to be introduced for Fors accreditation

Operators will be charged for Fors membership from later this year, although the exact cost has not yet been revealed.

Some of London’s black cab drivers are set to demonstrate tomorrow (27 July) at 5pm at Hyde Park Corner in protest against restrictions being imposed on them during the operation of the Olympic Route Network (ORN). FTA has been advised by the Metropolitan Police of the planned demonstration as it is anticipated that there will be disruption in and around the area. Police are talking to the organisers and a proportionate policing plan is in place to manage the situation.

TfL has put up £50,000 towards a new freight hub in Hammersmith, which is intended to reduce traffic and congestion in the capital.